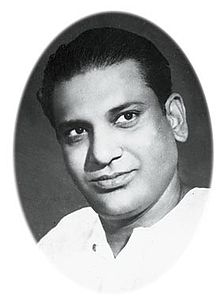 Born in Sujangarh, Rajasthan he got his first training of music and dance from his father who was a dhrupad singer and a Kathak dancer in the royal court of Jaipur. In his teens, he joined Bikaner Royal court as a singer performer and later moved to the royal court of Nepal.
He was a music composer, known for Tansen (1946), Bhartrahari,  Mahal (1949), Ziddi (1948) and Jan Pahchan (1950).
He worked as a court singer before he found his true calling in film music. After assisting composer Timir Baran in a few films, Khemchand Prakash debuted as a music director for the Supreme films for Meri Aankhen and Gazi Salauddin (1939).
One of his song that had the biggest impact on Hindi film music, ‘Aayega Aanewala’ sung by Lata Mangeshkar and written by Nakshab Jarchvi for the film Mahal. This was the song that made Lata Mangeshkar a household name overnight.
Khemchand Prakash is also credited with launching the voice that captured the nations imagination for decades – Kishore Kumar with his first solo, ‘Marne Ki Duaaen…’ for Ziddi (1948).
In a short career spanning just about a decade, he left behind a legacy that exceeded his output as a music director.
He died on August 10, 1950 in Bombay, State of Bombay, India.